Despite being Andalucía's fastest-growing town - it overtook Córdoba in the big three Andaluz tourist attractions, behind Sevilla and Granada, in the early 21st century - Ronda retains much of its historic charm, particularly its old town. It is famous worldwide for its dramatic escarpments and views, and for the deep El Tajo gorge that carries the rio Guadalevín through its centre. Visitors make a beeline for the 18th century Puente Nuevo 'new' bridge, which straddles the 100m chasm below, for its unparalleled views out over the Serranía de Ronda mountains. 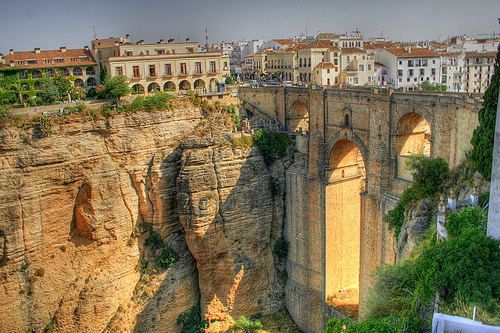 The beautiful town of Ronda lies 60km up a winding mountain road from Marbella in the mountain range known as the Serranía de Ronda. It stands at an altitude of 739 m and has approximately 35,000 inhabitants.

It is one of the most visited towns in Andalucia with most people arriving on day excursions from the Costa del Sol.

Ronda is also famous as the birthplace of modern bullfighting, today glimpsed once a year at the spectacular Feria Goyesca. Held at the beginning of September, here fighters and some of the audience dress in the manner of Goya's sketches of life in the region. Legendary Rondeño bullfighter Pedro Romero broke away from the prevailing Jerez 'school' of horseback bullfighting in the 18th century to found a style of bullfighting in which matadores stood their ground against the bull on foot. In 2006 royalty and movie stars were helicoptered in for the Goyesca's 50th anniversary celebrations in its small bullring, while thousands jammed the streets and parks outside. Otherwise the bullring, Plaza de Toros, is now a museum, and visitors can stroll out into the arena 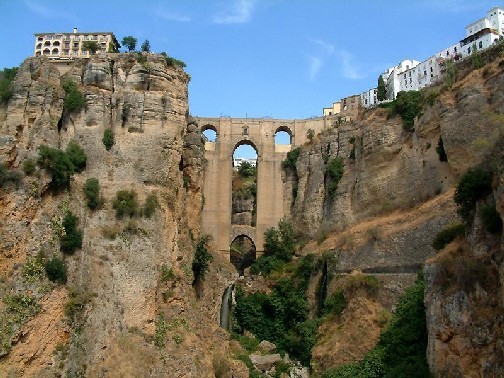 Across the bridge, where an elegant cloistered 16th century convent is now an art museum, old Ronda, La Ciudad, sidewinds off into cobbled streets hemmed by handsome town mansions, some still occupied by Ronda's titled families. The Casa de Don Bosco is one such, its interior patio long ago roofed in glass against Ronda's harsh winters. Its small, almost folly-like gardens lose out, however, to the true star, a few minutes' walk to the furthest end of the Ciudad, the Palacio Mondragón. Clumsily modernised in parts during the 1960s, this still has working vestiges of the exquisite miniature water gardens dating from its time as a Moorish palace during Ronda's brief reign as a minor Caliphate under Córdoba in the 12th century 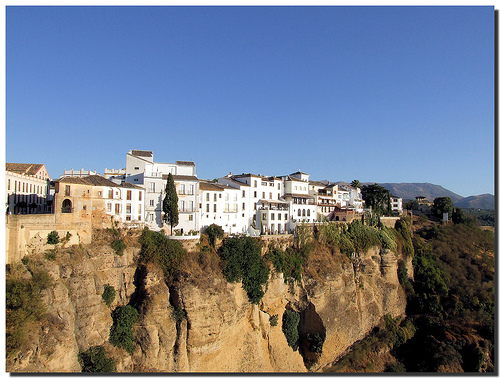