Beginning of next year, the long time planned transformation of the port in Marbella in one of the most luxury Marinas of the Mediterranean Sea will be reality. Marbella always has been the meeting point of the high society and high class tourism. Now the dream of a Mega Marina where even cruise liners can dock is comming true.

In four years the Marbella Town Hall in a unique collaboration with the corporate centre of Sheik Abdulla Bin Nasser Al-Thani, who is also the new owner of Malaga football Club will amplify and remodel the coastal area and built a unique semi circle Marina . The representative of Sheik Al-Thani informed that they have planned to invest 400 million Euros in the project, from this 84 millions will flow to remodel the costal installations

The arquitects Berenguer Ingenieros, Axel Logis and Segui Arquitects presented their project in a press conference in the Puente Romano Hotel. They want to transform the Marina in the “XXI century Puerto Banus”. In the past years Puerto Banus was the attraction point of the high class tourism in the Marbella area, in this century it will be the new La Bajadilla Marina in Marbella.

In this coming years the construction will bring 3000 direct and indirect new employments to this area what will be a tremendous benefit to the economy in this region. The port will have a semicircle form seeking the best circulation of waters, a maximum of functionality, capacity of the port and supposing to be a soft transition between land and sea, said Segui, and represent a future standard for marinas. The Marbella Marina will have space for 1221 yacht and cruise liners. There will be 858 moorings for yacht, 3 piers for cruise liners, 3 moorings for mega-yachts, 2 for yachts with 125 m length and one of 175 m length. A total of 860 will be in the water and 360 in dry boat storage. The circular space will include 45.000 sqm of commercial and leisure facilities and a 5-Star hotel with 200 beds. The area will dispose of more than 1.000 parking spaces and will have two entrances. This project will become the emblem of the new cosmopolitan Marbella and a worldwide reference in high class tourism .

The La Bajadilla port, also known locally as the Puerto Pesquero on the East side of Marbella town is set to undergo a dramatic expansion, plans for which include commercial areas of over 12,000m2, car parking with around 250 spaces, a 5 star hotel and three times the current number of moorings. The project is currently in a tendering stage, with bids reported to have been made by the Qatar sheikh Nasir Bin Abdullah as well as some large Spanish companies and a handful of banking institutions. The successful applicant will develop the port area over a period of three and a half to four years and hold a 40 year contract for the running and maintenance of the port. The town hall’s plans for the new port include an area specifically designed for medium-sized cruise ships with mooring spaces for boats 112m-146m long. Covered jetties are planned where passengers will be able to disembark in safety and comfort even in bad weather. The surfaces dedicated to commerce will be divided into areas which will up for rent or purchase, therefore the possibilities are endless with the potential for bars, restaurants, shops, supermarkets, etc. The proposal also includes a hotel project worth an estimated 124 million euros, the design for which will be “emblematic” and is to be chosen from amongst the entries of a design competition. This first class yachting centre will signify an income boost for the town of Marbella, in addition to new investment possibilities and the potential for both the expansion of local business and new business, not to mention a great new leisure area for the enjoyment of locals and tourists alike. 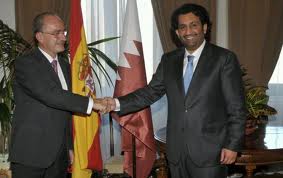 Marbella’s fishing port La Bajadilla will be expanded to a total cost of 400 million Euros. The Andalusian Port Authority has selected the project submitted by the sheik from Qatar Abdullah Ben Nasser Al-Thani, who is also owner of the football team Malaga CF. He will invest 100 million Euros in Malaga football team for next season. Now presented the next venture on the Costa del Sol by Sheikh Nasir bin Abdullah. Leisure Port Puerto de La Bajadilla in Marbella should be expanded. The Andalusian Port Authority rejected an alternative project for the port, which had been presented by local entrepreneurs. Marbella La Bajadilla port is situated at the northeastern entrance to Marbella is more than double its current capacity and provide moorings for a total of 1220 boats. In addition, the port to accommodate cruise ships, which will benefit the local economy to any great extent. Also will the construction and sale of Property Marbella like Marbella apartments and Marbella villas will increase with these investments. The actual construction project is budgeted at 84 million Euros, although the total investment is said to be around 400 million Euros, without need of loans. The agreement includes development rights for 40 years and the new port is expected to take four years to complete, from the commencement of work. Marbella municipality and Marbella Town Hall Mayor Angeles Munoz support this project for put Marbella on the map again as a friendly town on Costa del Sol