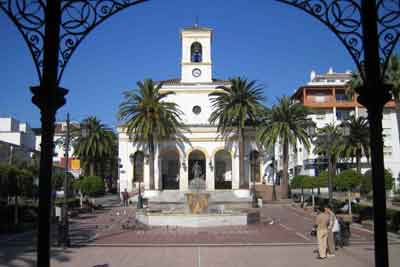 Travelling west on the A7 coast road you enter San Pedro when you cross the bridge over the River Guadiza at the Hotel Cortijo Blanco, travel about 3 km, and exit the town about 200 metres after the huge white archway which declares the end of Marbella and consequently San Pedro.

San Pedro de Alcantara, comes under the jurisdiction of Marbella . San Pedro with residents wanting independence from Marbella all without success. However San Pedro has its own Ayuntamiento (Town Hall)– with its own mayor and counsellors all who at the time of writing, are in office and not in prison! despite being 9km from the centre of the town that always seems to be in the news. It is only 2km from Puerto Banus but a more different place would be difficult to find. The only aspects they all have in common is that they are on the shores of the Mediterranean and the huge mountain La Concha (1.270 metres high) can be seen from all places. There have been many demonstrations in

In contrast to many coastal towns San Pedro wasn’t a typical Spanish fishing village in years gone by but an area of intense agricultural cultivation.
The original San Pedro goes back to the 1860’s when General Manuel Gutierrez de la Concha who was the first Marques del Duero colonised the area into an agricultural haven. He instigated the clearing and draining of 10,000 hectares of land to provide land that could sustain high cultivation with an efficient system of irrigation. Even today when much of the population is involved in tourism and associated services there are farmers remaining on some of the land.

In 1953 Marbella Town Hall initiated public lighting, street cleaning, rubbish collection and care of the cemetery thus confirming that San Pedro de Alcantara was indeed part of Marbella. The main street Marques de Duero was also paved for the first time.
It wasn’t until the 1970’s that tourism became the main force of the town’s growth. Great progress was made with the installation of water and drainage systems, a telephone network, the paving of the streets and the opening of the first chemist. Other projects flourished with the building of residential areas, shops, hotels and golf courses.

Thus by the time I arrived in 1987 San Pedro was part of the well known Costa del Sol and even warranted a full page article in the prestigious newspaper The Sunday Times, which declared “that the N340 highway passing through San Pedro de Alcantara should be renamed the road of death and was the most dangerous road in Europe with 365 deaths a year”. They were not kidding!
The road was dual carriage way but with no central reservation restricting traffic from ‘crossing over’. Accidents were regular and the sirens of ambulances and police cars seemed to be part of the normal noises of the day!

In those days from the main road there were totally unhampered views of the Mediterranean, no buildings, just ‘campo land’, grasses, wild flowers and dust paths down to the sea. Difficult to believe when you see the many newly built apartment blocks known as ‘New Alcantara’. Unfortunately the new infrastructure needed to accommodate this expected increase in population has been a little slow in coming.
A new underground car park under the main street was opened a couple of years ago which does alleviate some of the parking problems. The long awaited ‘tunnel bypass’ has started thus causing even more traffic problems whilst it is being built. However the end product of pedestrian walkways, leisure gardens and tree-lined avenues down to the beach in two years time will hopefully be worth it.

San Pedro itself has managed to remain true to its Spanish origins and culture (despite the increasing number of ex-patriots). Thankfully the predominant language you hear around the town is Spanish and it doesn’t feel like an enclave of the UK! The town itself is compact and I think the indigenous population are very friendly. There are not many towns these days where people from the chemist, the post office, the bank or the supermarket recognise you walking down the main street and say “Hola”! 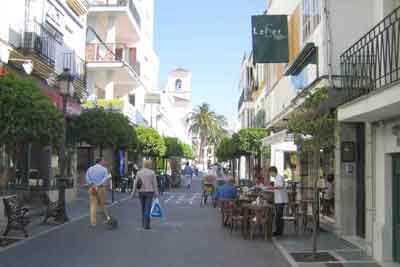 You can walk up the main street, Marques del Duero, and straight along the pedestrian only street passing cafes and restaurants interspersed with clothes shops, shoe shops, a florist, a bank, the lottery office, the odd gift shop and a tobacconist until you reach the church square- the life centre of San Pedro.
Here you will find the Parish Church and the Town Hall. Most roads lead to the church square and it is nearly always busy. There is a small play area for children, lots of seats, lots of pigeons a beautiful fountain and several pleasant bars for coffee, tapas or a meal in the evening.
After 7pm, if anything, it seems to be even busier. People of all ages meet to chat about their day, children play with each other and the older men and women sit, talk, smoke and watch over their grandchildren. A lovely atmosphere but it can be noisy!

Actually on the Calle Andalucia there is Alfredos a popular Spanish meat and fish restaurant plus a very reasonably priced Indian Restaurant. If you turn off the main street opposite the farmacia and walk down Calle Cordoba until you reach the cross road (about 100 metres) on the corner there is an excellent bar for freshly cooked Churros and thick hot chocolate. Whilst straight across the road is another excellent Tapas bar called Charley’s Bodega.
Going down to the beach it is quite a long walk but if you drive down there is ample parking space all along the promenade (maritimo).
The promenade itself is wide and beautifully tiled with lush gardens on one side and a sandy clean beach on the other. You can walk East to the far end of the beach where there is an excellent Spanish bar/restaurant called ‘Rafas’. Twenty years ago it was very small but well known for its paella and other Spanish dishes – now it has lots more tables and a large sheltered outdoor area and the food is still excellent and very reasonably priced. If you visit ‘Rafas’ on a Sunday or holiday/ Feast Day for lunch then you should be prepared to have a long leisurely meal as it gets very busy with Spanish families eating ‘en mass’ – probably better to go on an evening if you want a quieter atmosphere and quicker service! 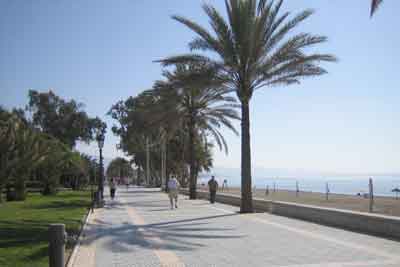 If you walk to the western end of the beach you will find Borra Borra – quite an ‘upmarket’ beach bar – comfy seats but more expensive drinks! Just a little further on after the Jet Skis there is a Chiringuito situated on the beach with a good Spanish menu of fresh fish and meat – a delightful place to spend a summer evening and enjoy the cool breeze off the sea.

For those who like the historical background there are Roman Ruins known as Las Bovedas which date back to the 3rd century. They are situated down near the beach at Borra Borra.

Las Bovedas is an octagonal building in its design. The central nucleus and part of the seven rooms surrounding it are conserved but most of the rest are ruins.

There was an upper floor which consisted of an interior gallery giving access to a number of cubicles and an upper terrace. The materials used for construction made use of the sand and pebbles from the beach mixed with lime, producing an extraordinary hard material which has resisted the passage of time. It is thought that Las Bovedas were possibly used as public baths or spas or even perhaps for water storage at the ending of an aqueduct.

Despite the ongoing development of the Costa del Sol, San Pedro de Alcantara has managed to preserve its Spanish identity and remains a very pleasant place to live or visit.