Imagine three stunningly beautiful turquoise coloured lakes bordered by pine forests. A tranquil retreat where you can swim or fish, or picnic on the lake shore. Hardly sounds like a typical Andalucian scene, does it! But west of Alora that is what you will find. Malaga's "Lake District" is in fact three artificial lakes created by a dam built across the dramatic 200 m. high Guadalhorce river gorge, known as the Garganta del Chorro. Watch out for the eagles which continually circle around the sheer cliffs

From your journey through the Valle de Abdalajis you will arrive at the small village of El Chorro and your first sight of the dam and gorge area. There is a small bridge across the middle of the gorge, built during the construction of the reservoir between 1914 and 1921. The dam was officially opened in 1921 by King Alfonso XIII of Spain and on this occasion he took a walk along the specially constructed catwalk, called El Camino del Rey (The King's Path), pinned to the face of the gorge some 100 m. above the river 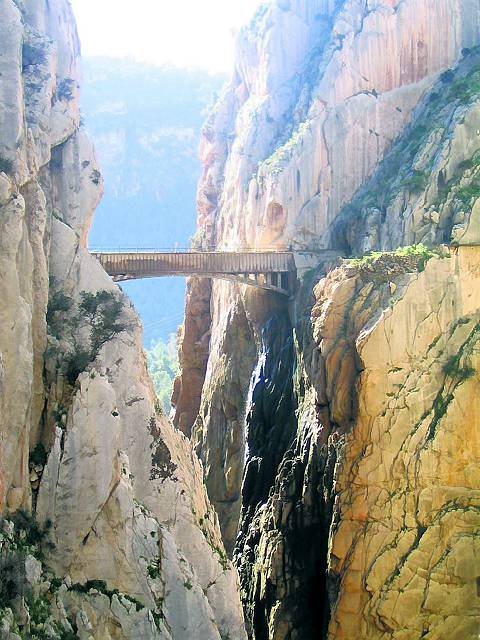 The Camino del Rey, actually dates back to 1906, by some accounts. It is officially closed to the public pending repairs. On January 21 2006 the regional government announced that there were funds available in the 2006 budget to make repairs to the path.

There are trained guides who do take visitors along the path. As you will gather from the video on this page, this is not a trek for the faint hearted - or those with vertigo. In addition, climbing and trekking in this area is really only for experienced climbers with proper equipment.

If you simply want to see where the Camino del Rey begins, it can be found by driving across the lower dam into the village of El Chorro, take the track on the left before the railway station, continue past the camp site until you can drive no further. Walk the last few hundred metres. The path drops down and skirts the iron girder railway bridge (take care crossing the line, Von Ryans express was filmed here).

To reach the lakes, drive over the dam and follow the road round to the left of the gorge. Just keep on this road and you will come to the lakes, about 4 km. drive. Even though the lakes are very popular in the summer, their shores are so vast that it is easy to find a quiet place to sunbathe, swim and picnic.

We recommend a delightful waterside restaurant El Kioskoll, a particular good choice for the winter visit as a blazing log fire and their excellent roast lamb and pork go down well after a walk along the shores of the lake. But equally delightful is their summer terrace with views to the lake. To find El Kioskoll continue east along the lakes, through a tunnel under a lakeside restaurant and cross over another dam. You will find El Kioskoll on the right hand side of the road.

Take the minor tarmac but pot-holed road up to the upper lake of this
hydroelectric pump storage project for exceptional views. There is a restaurant, now abandoned due to lack of passing trade and the site of the deserted village of Bobastro.

Bobastro is an ancient village so don't expect to find any people living there today. It is located near the village of Ardales in Malaga's lake district. The site comands exceptional views of the surrounding countryside.

The legend of Bobastro goes back to the time when the Moors ruled Al Andalus. The fortified village was the headquarters of Umar ibn Hafsun who led a revolt against the caliphal government at Cordoba between 879 and 918 AD. By 899, he had converted from Islam to Christianity and some time in the early tenth century, he commissioned the construction of a church.

This church the highlight of the ancient village is a church cut directly out of the rock. Its primative structure can still be seen as three sections separated by horseshoe shaped arches. The church is perfectly orientated towards the East and measures about 16.5 metres long and 10.3 metres wide.

The ruins are located in an area known as Las Mesas de Villaverde between the hills called Tintilla, Castillón and Encantada. The nearest road to reach Bobastro is the MA 444 which runs from Alora to Ardales past the famous El Chorro gorge.